My time at OwnerShips
Chapter 16 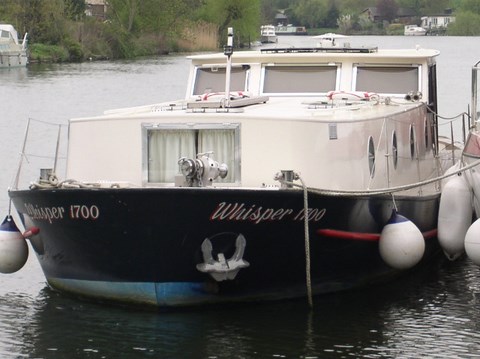 The next bolt was the afore-mentioned Whisper project. Allen was hell bent on building this boat and when I asked how he was to fund the say £400,000 it would cost to build it he said it was to be from The Free Services Scheme where he tweaked the wording of the agreement so he was "covered" if the owners got wind it was that they had in effect paid for it, something that was actually technically outside of OwnerShips and the signed agreement as it WAS.

So it was that say 160 owners were sucked in at £2,500 each to lending OwnerShips money, which was, alone, robbing the "Office" side of the business £40,000 of income EACH YEAR.

About this time Banks were falling over themselves to lend money and the landlord of the house we were renting in Bounds Green had decided he wanted Allen out and he was going to sell it. Allen decided it would make sense for him to buy it (actually probably a good decision) and Barclays Bank agreed to lend him the money for a mortgage on it. Allen signed  up and all that Allen had to do to buy the house for somewhere near £250,000 was to find the 5% deposit. When the request came though for the payment of said deposit, some £11,000, we did not have it. I asked Allen where the money was to come from, he said to take it from the Clients 2 Account but put it through OwnerShips Ltd first or the bank might think it odd. I asked him about how I was to treat the VAT and he said I was to put it though as a VAT free loan to the business.
I handed him the cheques to sign, I had signed my last cheque for OwnerShips.
A few days later I handed in my notice.

In a lot of ways it was an easy decision but balanced by great sadness.

Next...Life after I left OwnerShips