My time at OwnerShips
Chapter 15 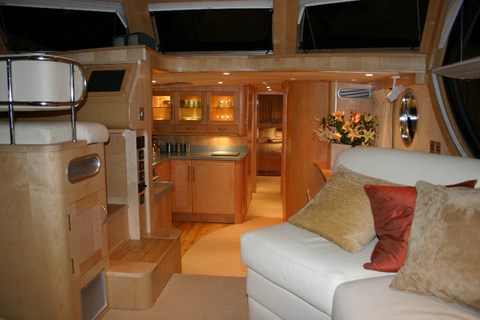 Not put off by the disasters these barges seemingly were proving to be Allen had this pipe dream of living on a wide beam barge on, say, the River Lea (or Lee). He wanted to turn this dream in to a reality and decided the best way forward was to basically built something like it, sell it for a profit and build another and so on, he had found a way to make LOTS of money.
The Whisper project (left) was to be the ultimate luxury barge. More about this later...
Office life at OwnerShips was never dull. I (we) never stopped, I often worked well after my normal hours and took work home (or down the pub as previously mentioned). I would say to Allen I needed help and his answer was to offer me a pay rise. I said that would not actually be of any help, so always declined, indeed I never took a pay rise in all the time I worked at OwnerShips. Staffing was often an issue, as outlined earlier, but one gem we did manage to find was Elaine.

She and I got on well, both as forthright as each other I suspect! We worked very hard getting all we needed to get done often well over our "normal" hours. By this time Allen had relocated his office to a bedroom upstairs and we kinda kept abreast of what everyone was saying using a baby monitor to hear each other, it was not that successful. One thing crucial in running the office was each one of us being aware of what the other was saying (!). It was no good if Mr X was booking a boat and I knew full well it was either not available as it was stuck the wrong side of a stoppage or whatever, so all knowing what everyone was saying and to whom I felt key, it did not always work but I think we managed to get through it.
Although helping me with some general office stuff Elaine also was Allen's assistant and prepared contacts and the likes for new customers and processed sales. So my "help" was somewhat diluted and every now and again a "friend" of Allen would turn up and do some filing etc. (See below)
Allen's personal life was something that also affected office life to some extent. Basically Allen really had no male friends at all, quite why I have no idea to this day. He did all the usual things and went to school like anyone else and on to University but there was never any mention of any old school or Uni' friends. He did however have a string of ex-girlfriends whom it seemed he could never quite let go of, so ex-girlfriends became...well friends cum office help cum occasional gardeners!
Something new came along in around 1996 for us, with the new computers we had the Internet and within that Allen decided to try what is known as "Internet Dating" and seemed to have a different "date" almost every night.

He never really cooked at home, he was strictly a frozen meal, a fork and a microwave when he did anything for himself, and I can understand that, but when having a "meal out" he was not heading for the local carvery or McDonalds, he was more your decent restaurant type and not for Allen the house plonk to wash it down, it was always something better than that. So, I guess the ladies he tried to woo were somewhat taken with the offer with fine food. Generally I never got to meet these ladies as he saw them in the evenings and why would I? But I did get to see the bills that came in to pay for the meals...
The was one date he had called Deborah whom he met through the Internet and before long Deborah was pregnant and nine months later Allen had a son; Sam. In true Allen fashion the relationship did not last and they broke up, but of course Allen was still the child's father and so was financially providing for him, and his mother who could not work as she had to look after him. The (eyewatering) monthly sum going out was yet another burden.
Looking back at all the excesses and losses it is a wonder we were still trading as all but with more and more boats coming on stream to pay management fees the company was getting enough money in to prop up all these losses but no thought was ever given to refilling "The Hole" in the Clients account and as long as we were still building boats and people were still paying money out for boats some months ahead, we carried on. As I mentioned earlier the Clients number 2 account was never audited and that is where all these somewhat large losses were hidden.

Next...Whisper, the last straw as far as I was concerned