My time at OwnerShips
Chapter 14 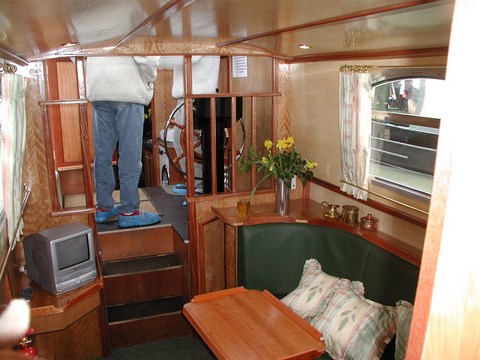 Derwent, built by Simon Piper, was an unmitigated disaster. It was meant to be the "mini flagship" of the barge fleet and sadly was ill conceived from beginning to end. Allen was advised from the off that his plans would not work, mainly by Guy our engineer who said wheel steering on the shallow canals with tight bends did not work, nor Dutch Barge style with wheelhouses, which is why there are so few of them on the inland waterways. Allen thought differently.

At 60' long Derwent had the engine mounted in the bow so the steerer was offered a virtually silent position from which to steer (where have we heard this before?). The drive to the propeller at the rear was by way of hydraulic pipes. The boat had a central wheelhouse and a small en-suite cabin at the rear and the saloon forward of the wheelhouse and a double cabin in the bow, again en-suite. I never saw the plans or the boat until it was craned in for our February show at Braunston. I was horrified when I stepped on board. Firstly it felt very cramped and narrow but worse there were no doors from the main cabin out to the wheelhouse. Not so bad in the summer but in the winter it would be freezing, also it was like sharing your living room with your garage as that was where all the "clutter" associated with boating went. Those who looked over it also shared my view. As it turned out this really was the least of the problems but after some modifications (see further down) became the final nail in the coffin. 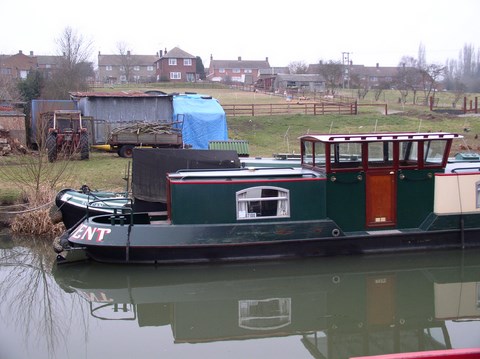 Dewent made the most horrendous noise when underway, a loud singing, almost screaming, noise along the whole length of the hull. The pipes doing the hydraulics were in steel and affixed to the hull and this created the most appalling harmonics. The solution was to change them for rubber hydraulic pipes some 50' long along the length of the boat. Quite how safe this was going to be worried me I confess but we never had an issue with them, perhaps because we never had the boat long enough. The pressure in these pipes must have been immense. Had one split the oil coming out would, if it hit you, probably kill you.
Anyway the job was done and the boat entered in to service. The boat had a central wooden wheelhouse which was designed to fit under most bridges and would only need taking down on certain waterways according to the dimensions in the canal guide books. OK here and there it was close but it should fit. 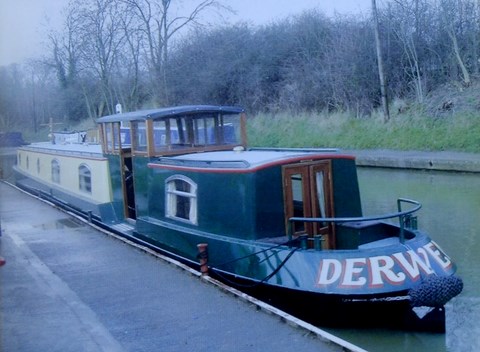 This time it was decided that instead of a wooden wheelhouse a "pram cover" arrangement would be installed as it was faster to take down and cheaper to mend, so this was duly done. This of course meant that when you were in the saloon, with no doors from there to the wheelhouse, you were in little more than a tent and security was now impossible. The customers who owned shares were not impressed and Allen had no option but to refund them and sell the boat. I cannot remember how much it sold for, and I think it ended up on the River Thames, but to say we made some substantial losses on it would be an understatement. 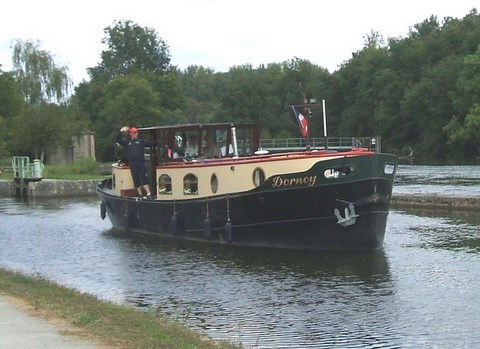 A footnote to all this saga was that rather than my having nothing to do with the barges as I was assured I ended up in Ireland around four times and France at least twice trying to sort out problems and issues. France was a nightmare even for the smallest things. By example whereas on boats over here hinges and fittings are nearly all brass over there they are stainless steel, so replacing something as small as a hinge becomes a job and a half. Trying to get anything done was just like talking to a brick wall. Still, Auxerre was nice!
Ireland was a joy. The people there had a "craftsman" working for them who was Russian and he spoke no English. He was either ex Russian army or on the run from them, I never did work it out. Egor as I recall. Again getting anything done was fun. A lot of the doors had swelled up and were ill fitting. I had to take them off myself, walk about 1/4 mile to the workshop carrying it, get it trimmed and return and refit it and repeat the process with the next one, in Ireland, in the winter, in the rain....Barges eh? Don't you just love them.
(Footnote: Digione was a private shared boat but I think is no longer deemed as shared)

Of course all the losses on the barges needed to be funded in some way, and so, yes, you guessed it, another round of "Free Management Offers" and another raft of owners, probably around 60 raising £150,000 were called in, costing the company £15,000 a year this year, and every year going forward.

Next...Another resumé before we get to the straw that..