My time at OwnerShips
Chapter 13

In 1996 we had a severe water shortage on the canals and Allen began to worry we might have no business if there was no water and so decided to look further afield for boating options. In 1992 on the back cover of OwnerSnips (an excellent internal magazine for Owners) a wide beam Penichette styled boat had been mooted and had never got of the planning stage, but this time Allen wanted to take it to fruition. I was mortified.

We had no money, let alone enough money to built barges costing £60,000+ each. There were to be four barges, one in Ireland, one on the Thames, one in France and a narrow beam one on the canals. Owners buying in could exchange weeks between each one. On paper it sounded fabulous but my job was hard enough trying to manage boats in the UK, but add France and Ireland in the mix AND the lack of money and....well you can guess how I felt. Allen countered this by saying I would have nothing to deal with in the boats in Ireland or France, he would deal with them.

The first boat was to be for Ireland, DERRINEEL and to be built by Pat Buckle. It has to be said that whilst it lacked any classic lines externally, internally it was beautiful, a real floating country cottage. Initially after build it went on to the Thames for testing and it was discovered it did not steer too well, indeed it was a bit of a brick as it had been built with a flat bottom so it went almost as well sideways as forwards. Also as you steered from a wheel in the centre you had no idea where the rudder was pointing, and as the steering was hydraulic you could not even put a marker on the wheel for "middle". A rudder position indicator was needed. Not a easy job but it was done, and it lasted about ten minutes. OK, so the Thames is a fast flowing river and the Shannon Erne waterway in Ireland was a series of canals linking some large lakes (loughs) together and more forgiving so off to Ireland it went. Of course moving things this big does not come cheap....
The second barge to be built was for France and called Digione. This too was built by Pat Buckle and as it was well in build before the problems with Derrineel and the steering were picked up on it too suffers from the same steering issues. 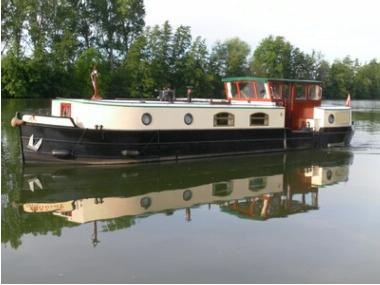 Allen decided to shift production to Simon Piper who had been building barges for several years and next came DORNEY that was to be the boat for the Thames. The was a V-Bottomed boat and steered like a dream. Subsequent barges were DECIZE, DORCHESTER  and DONJEUX. Dorchester ended up being the barge on the Thames as Dorney ended up in France with Donjeux which was always destined to be there.

Derrineel in Ireland did not sell. With only about four shares sold, it was decided it too would have to go to France where there was a demand for shares. It was shipped from Ireland to England where it appeared in the February OwnerShips show and then transported to France. I think the cost of shipping it alone came to £14,000. More that the total profit we SHOULD have made on the whole boat with all shares sold. The losses made on these boats would be eye-watering if worked out, but they would pale in to insignificance compared to the losses yet to come on the ill-fated, and ill conceived, Derwent, the narrow beam Dutch Barge for the UK canals.