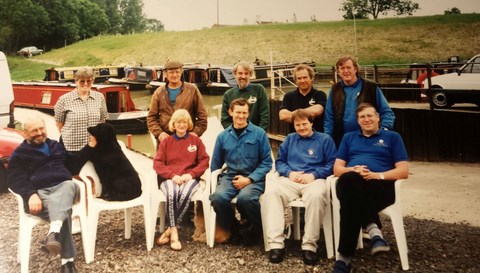 And so it was that in June 1995 I started work at OwnerShips with the grand title of "General Manager", leaving in August 2003.  I had no idea what I was letting myself in for!
The OwnerShips "office" was actually the dining room of a rented house in Bounds Green in North London. I was living in Ruislip and soon realised my drive to work to start at 9 a.m. meant leaving my home in Ruislip at 7 a.m. and very soon my hours were changed to a start time of 10 a.m. and a finish of 6 p.m. to try and avoid the traffic, even so my journey home each night was a nightmare. Alongside this on a Friday I was to work from Blue Lias Marina near Southam, a round trip of 168 miles. Sometimes this was quicker than the 16 miles to the office along the Western Avenue (A40) and North Circular Road (A406).

The "Office" consisted of two desks, a large photocopier and some filing cabinets and other filing places. Boxes of paper for the copier went anywhere they could be fitted, but more often than not on the piano in the hall. Allen Matthews (MD) lived in the rest of the house. It was a disorganised mess of a place, but actually that did not really worry me too much.
Above is a picture of myself and Allen and the contractors that worked with us:-
In the picture above, back row L-R Barbara Payne (cleaning services) Chalkie White (Marina Caretaker) Dave Cowton (Repairs) Guy Sherratt (Repairs) Allen Matthews (MD) front row Pat Buckle (Boat Building) Pat's Dog, Margaret Cowton, Peter Borshick (Diesel Engineer) Philip Duerden (General Manager) Phil Capp (Sales). These were the staff in 1995. Barbara Payne, Guy Sherratt, Allen Matthews and Phil Capp remained associated with the company in some way until the bitter end.

Next - Office life and who am I?