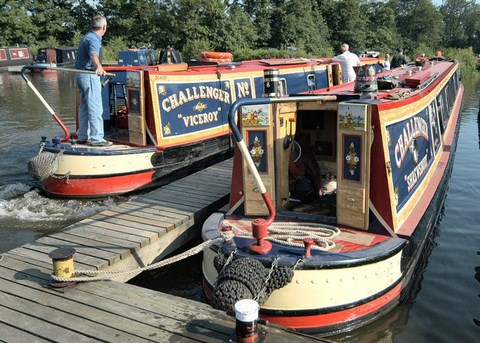 Challenger wa set up in around 1989 by Ed and Gill Rimmer initially as a hire company but then became more focused on Shared OwnerShip.

Prior to setting up Challenger Ed and Gill were the owners (directors) of Black Prince Narrowboats, the company entered recievership under their tenure and was bought out by the present owners (Tim Parker etc).
Challenger managed shared boats in both the UK and France and perhaps further afield. Ed and Gill Rimmer played their cards very close to their chest so it was always difficult to establish exactly what they had under thier umberella.
The company went in to administration in Jaunary 2008.

A boat hire boss from Worcestershire appeared in court on Tuesday and was convicted of 18 fraud-related charges concerning the operating of two charter companies.

Another 17 charges brought against Rimmmer were laid on file and there is no intention at this time to prosecute him for these offences.

Rimmer was arrested on 2 June 2010, questioned by detectives in relation to his business activities and charged on Tuesday 14 September. He was convicted of fraud amounting to £536,000, but officers believe there is a potential fraud of £2.5 million.

Each boat cost in the region of £80,000 – £90,000 with an average of 13 parties sharing each boat with a share costing a maximum of £12,000. Challenger Syndicateships would take a proportion of the amount paid by each party as well as an annual management fee to cover servicing and other expenses, such as insurance licences.

In 2003, he branched out into powerboats and yachts operating out of Spain, which managed boats costing around £500,000 and a share would on average cost £75,000.

Both companies operated until January 2008 when both businesses went into administration.

It was at this point that Rimmer’s operation was revealed as illegal. He had been committing fraud in a number of ways, most notably:

In 2004, Challenger Syndicateships started buying older boats from syndicates and source a new one for them, using the older boats as hire boats for holidaymakers. The purchase capital was invested by sponsors (individuals or local businesses) who in return got around 10% interest on their investment capital. It was found that Mr Rimmer had offered sponsorship of the same boats to two and even three different parties, each time taking a lump sum of up to £90,000. When Challenger Syndicateships when into administration, up to three owners expected to have ‘their’ boat returned to them.
Rimmer would utilise the maintenance fees paid for one boat in order to pay debts due on other vessels. He would thereafter produce false accounts to disguise this activity giving the impression that the maintenance funds for each boat were healthy when in fact the contrary was often true.

Gill Rimmer died in June 2011, she was considered too ill to be question by the police following to collapse of the company

Ed Rimmer was sentenced to 2 1/2 years in prison for fraud in September 2011, and is now out of prison.Challenger adverts from WaterWays World